Posted by Team Phoenicia at 11:11 AM No comments:


Once edited, these will be put in proper order.
Posted by Team Phoenicia at 5:16 AM No comments:


Posted by Team Phoenicia at 6:09 AM No comments: 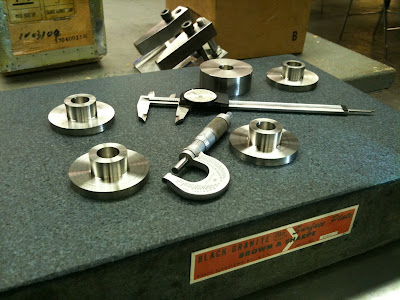 Posted by Team Phoenicia at 8:56 PM No comments:

Posted by Team Phoenicia at 9:51 AM No comments:

Dr Brandon Rohrer Answers Why We Do This

This originally appeared on the official GLXP blog for the team.

Dr Brandon Rohrer is the nominal team lead for rover development. His day job is a robotics and AI researcher at Sandia National Laboratories in Albuquerque, New Mexico. He earned his bachelor's of science in Mechnical engineering from BYU and then his Master's and PhD in ME at Massachusetts Institute of Technology. He was the second person to join Team Phoenicia and part of the reason that we are often called the 'New Mexico' team.

Recently when James, a long time friend of Team Phoenicia, wrote his post arguing lunar He3 nonsensical reason to be pitching going to the Moon, a responder asked then, why ought we go. Why go to the Moon at all? Brandon wrote his own answer as to why we are. Or, perhaps, his own special reason.

Occasionally it occurs to me to step back and ask why we’re doing this. Why go to the moon? How many episodes of Family Guy could we collectively watch in the time we dedicate to getting there? How many slices of pepperoni pizza would our funding buy? Is it worth it?

It seems especially relevant considering that we’ve already been there, at least as a species. Sure, putting a man on the moon was the cultural icon of humanity’s technical achievement. But that was four decades ago. It's older than Zork. Isn’t that yesterday’s news?

There are the obvious answers of fame and fortune. Or at least bragging rights and pocket change. But the magnitude of the task is completely out of scale with the financial compensation or notoriety we might receive. There are far more straightforward ways to make a small fortune (investment banking, for one) or to get a million hits on YouTube (like videotape yourself lip syncing to “Numa Numa”). Why go to all that work?

Perhaps it’s just the magic of the moon. It glows at us, well within our vision but, like so many of our dreams, perpetually out of reach. It turns suitors into lovers and men into wolves. The moon is a symbol of the great space beyond our floating island, and to reach it offers the possibility of breaking our landlocked existing and leaving our terrestrial cares down below. It is our stepping stone to Mars and gateway to the stars beyond.

And even though humans have set foot on its surface, that accomplishment belonged to the government rather than to individuals. It was a concerted multi-billion dollar institutional thrust. And it belonged to a previous generation, now fading into memory with Knight Rider and 5 ¼” floppies. The Google Lunar X-Prize is our chance to get there personally. Maybe what drives so many of us is a primal desire to reach out and touch the moon with our own fingertips. Or at least to touch it with something our fingertips have touched. That way we make it ours in a way that can physically hold on to and tell our grandchildren about.

Either that or, like me, you’re just doing it to meet girls.

Posted by Team Phoenicia at 5:51 AM No comments:

Posted by Team Phoenicia at 3:29 PM No comments:

Posted by Team Phoenicia at 6:26 AM No comments:

Posted by Team Phoenicia at 3:45 PM No comments:

Posted by Team Phoenicia at 6:34 AM No comments:

James Nicoll is a friend of Team Phoenicia's and has been a source encouragement and commentary since the inception of our project. James has given a fair amount of thought into space exploration since it intersects with his dayjob. In a way. James is nontrivial member of the science fiction authorial community and Hugo nominee. We approached him (and others) about doing some guest blogs about lunar exploration and their thoughts thereof. James has had some strong thoughts on the long standing assertion used by some space enthusiasts to go to the moon: mining lunar 3He.

This post originally appeared on the GLXP blog for Team Phoenicia.

One of the primary challenges facing space development advocates is finding some new product or service that is not being satisfied at the moment that can be satisfied using resources found in space and only in space;since the Earth is inconveniently well-stocked with a rich abundance of materials and a technologically sophisticated civilization, competition from terrestrial rivals is a serious problem for space development schemes. Nobody wants to foot the bill for a communications satellite network only to discover they've been underbid by a cable company.

Lunar Helium-three (3He) has been widely promoted [1] as a killer ap for Lunar development; supposedly offering aneutronic fusion to an energy-starved world, helium three is pitched as something that is in short supply on Earth but common on the Moon, apparently the ideal raw material around which to justify the investment needed for Lunar development. In actual fact, lunar 3He is a complete chimera; it is not common on the Moon, it cannot deliver true aneutronic fusion, it is subject to replacement by terrestrial materials, and in fact our civilization is incapable of using it to generate energy at all.

Terrestrial 3He is quite rare; in fact current stocks-in-hand are declining, forcing prices upward. Lunar 3He reserves are pitched in such a way theseemingly large absolute quantities of 3He on the moon (waring pdf); phrases like “enormous reserves” are tossed around to describe the estimated millions of tonnes of 3He potentially trapped in lunar regolith. What boosters fail to highlight in press reports is that this vast reservoir is stored within a much larger amount of regolith; recovering one tonne of lunar helium-three would require processing ten million tonnes or more of regolith (warning pdf).

3He is pitched as a clear thermonuclear fuel. Unlike deuterium-tritium reactions, helium-three-deuterium reactions produce no neutrons. The catch is that deuterium can fuse with itself; while half of the D-D reactions produce no neutrons, the other half do produce neutrons. This means that while a fusion reactor using helium three would be cleaner than one using deuterium and tritium, it would still produce neutrons and so cannot be said to be a clean reaction; admitting to the neutron issue would mean admitting that the same mitigating technologies required for D+T reactors would be required for 3He+D reactors, although admittedly to a lesser degree.

3He+D is also harder to fuse than D+T. This means the payoff for power used to induce fusion will be smaller and the cost per kilowatt-hour produced smaller than for D+T fusion; reduced neutron emission comes at a cost.

There is a potential fusion reaction that is more truly aneutronic than 3He+D, one that uses boron-eleven; 11B +p yields helium; unfortunately like the 3He+D reaction, there will be side-reactions, in particular 11B reacting with alpha particles, that will produce neutrons but these will produce somewhat fewer neutrons overall than the side-reactions for 3He+D. Like 3He based fusion, 11B fusion is more difficult to initiate than D+T fusion and so will be more expensive than D+T but 11B has one great advantage over 3He; boron is a reasonable common substance on Earth and about 80% of it is 11B .

Unfortunately from the point of view of a space proponent, the ease of acquiring boron on Earth is counterproductive; if you can order the stuff from a mundane chemical supply company, there is no need to go into space to get it.

Lunar helium three would also potentially have to compete with terrestrial transmutation; 3He is produced by the decay of tritium and tritium can be produced by a variety of reactions, such as 6Li +n or 7Li+n. This admittedly negates one of the attractions of 3He fusion, since the production of tritium necessarily involves the production of neutrons.

Sadly, a thorough audit of the power-generating facilities of the world reveals a complete lack of commercial fusion power plants. This is because we have currently lack the know-how needed to build commercial fusion power plants. Not only are we currently incapable of building the devices on which the lunar 3He scheme is utterly dependent but it does not seem very likely that we will acquire the required skills any time soon; although research is ongoing commercial fusion is at best decades away, perhaps longer. ITER, a showcase project for fusion research, is only intended to produce more energy than it consumes rather than producing energy cheaply enough for sale; commercial exploitation of the information produced by ITER will have to follow the complete of that program in 2038 and will presumably involved D+T reactions, not the far more difficult D+3He reactions. It is arguably possible that most of the people reading this will be dead before commercial fusion is developed.

While it would be convenient – invaluable – for space development to have some substance that is both useful on Earth and difficult to obtain there, 3He is not such a material. Publicizing it as such a material is misleading at best and if the people 3He proponents hope to sway do even the least amount of research, counterproductive as well.

Posted by Team Phoenicia at 2:02 PM No comments: